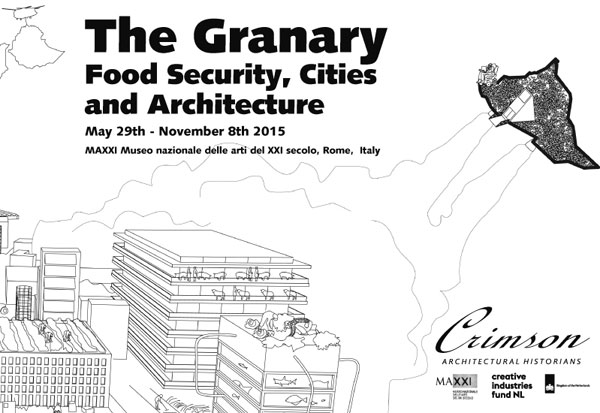 Crimson Architectural Historians is proud to announce the presentation of their installation “The Granary: Food Security, Cities and Architecture” in the MAXXI Museo nazionale delle arti del XXI secolo in Rome, taking place from May 29th until November 8th 2015.

The Granary. Food Security, Cities and Architecture is a contribution to the exhibition ‘FOOD dal cucchiaio al mondo’ undertaken by MAXXI which focuses on the architectural and spatial implications of food and food security around the world. MAXXI Museum acts as a satellite of the World Expo in Milan, themed: "Feeding the Planet, Energy for Life".

The Granary. Food Security, Cities and Architecture presents an Architectural History about how the storage and distribution of grain has been one of the main drivers of politics and the economy and has shaped our cities and landscapes since man first settled and invented agriculture thousands of years ago.

In a 20 meter long allegorical panorama, handdrawn on the double curved wall of MAXXI’s main gallery, the evolution of the granary is depicted: from central granaries in antiquity, through their successors in the warehouses and silo’s at the edges of our industrial cities to the palaces of abundance in the urban centers. But ‘The Granary’ is about more than a building type or urban form; it is first and foremost a genealogy of our answers to the problem of providing food security for an increasingly urban global community.