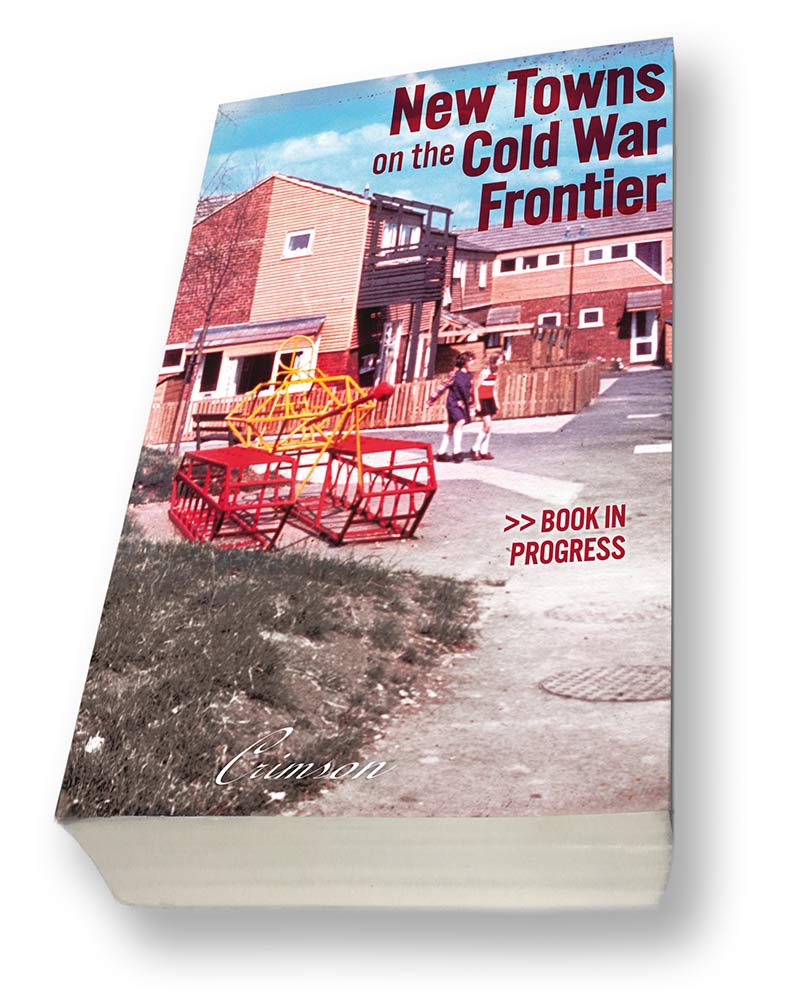 This is a BOOK IN PROGRESS by Crimson Historians and Urbanists. Its title is: "New Towns on the Cold War Frontier". At this moment, we present you a list of contents, an introduction and some chapters, each in itself the size of a book and independently readable. In due time there will be more chapters, added one by one. Eventually, the book will be printed in one volume of about 1800 pages. But this will take a while. We and our other authors simply can’t wait that long. Our essays want to get out there and partake in the many discussions on urban planning especially in the developing world. We believe in open source, both as a way of sharing knowledge with anyone interested and as a way to improve our own research with other researcher’s insights. Before we take the definitive step to the printer, we invite readers to give their comments and/or advice by sending an email to: crimson@crimsonweb.org

Here you can read the book, in three parts:

- Part 1, The First Generation New Towns in the West and the Eastern Block

- Part 2, Urban Planning as a Weapon in the Cold War

- Part 3, Critique from the Inside-Out on the Diagrams of the New Towns

The essays in this book examine a series of completely new built cities from the postwar period (1945-1980) from a political perspective. Its hypothesis is that urban planning in the Cold War period was considered to be a powerful instrument in the global competition between the capitalist and the communist block, and that the export of architecture and planning to countries that were still outside one of these blocks functioned as a means of cultural instead of military colonization.
This hypothesis formed out of our long-term research into New Towns, cities built from scratch, of which thousands were built all over the world in the fifties and sixties of the last century. Invented and implemented in the London region in the forties, these New Towns soon became the panacea for urban growth in Western Europe. After that, the same modernist urban planning started to pop up and spread in developing, decolonising countries in Africa, the Middle East and Asia. The export of these New Town principles can only be understood against the backdrop of the Cold War, in which the east and west were both competing for the loyalty of the developing world and the new nation states. The US, Europe and the USSR sent out urban planners, architects and engineers to countries in strategic places like Iraq, Pakistan, Mexico or Western Africa.

This selection of New Towns is obviously diverse and varied, but at the same time they are connected by many similarities. The similarities spring from their shared DNA rooted in both the garden city principles as the functional modernist planning rules, which became consensus all over the professional planning world in both east and west. This explains how the world population growth was accommodated along very similar lines in places very remote and different in cultural and political background. Whether one looks at the Villes Nouvelles around Paris, the New Towns close to Hong Kong, the satellite cities of Moscow, Stockholm, Ulan Bator or Accra, a similar strategy and urban design method was applied.

At the same time, the differences are also obvious. All of these cities were conceptualized and presented as the prefect embodiment of the political regime that backed it. Like the famous ‘kitchen-war’ between USSR in which Chroestjev and Nixon defended the merits of their political systems through the quality of the kitchen, the different New Towns were also meant to demonstrate the quality of the political system that had taken the decision to design and built it. Every single one of the Cold War New Towns aimed to present the best and most ideal city as the symbol of the political regime.

This becomes very clear when we look for instance at Reston, Volzhsky and Stevenage which each are model cities for diametrically opposed systems, respectively for capitalism, communism and social democracy, embodying in their physical structure and architecture all the values of respectively individualism, collectivism and the community.

At that time the urban plans and architecture were presented by their designers as the ultimate translation of their political system, as the radical alternative to the urban model of the ‘enemy’. After all this time, however, we also see many similarities. For example, many New Towns are very similar in their spatial design concept and in their architectural image (think of the Plattenbau in Sarcelles (Paris), Marzahn (Berlin), Cheryomushki (Moscow). The abundant open space that was designed between the flats can be seen in many cities, but in the Netherlands or Sweden it was the ideal place where the open society and the community could manifest themselves, while the same space in Moscow was presented as unique and typical of the collective experience of the communist ideal.

Apart from a fascination for the amazing stories these New Towns deliver, there are some specific questions that have been driving us while doing the research for this book. Some of these we started out with and prompted us to initiate the book in the first place and others we found while diving deeper and deeper into the matter.

The first one is obviously our hypothesis on the political motives that supported modernist urban planning in developing countries. In the first place this puts urban planning in a very different light from the neutral, technical way it is usually regarded. Urban planning was and is sometimes described as ‘white bread’, the innocent, soft bread, with no particular taste, which everybody likes. But this technocratic concept doesn’t prove to be right. Every city in this book is the translation of a certain societal and political concept and embodies these ambitions in every street, square and neighbourhood. This implies a huge significance attached to urban planning during the post war period; a determinist vision on an urban scale of Winston Churchill’s famous statement “We shape our buildings, thereafter they shape us”. Of course it remains to be determined whether that concept eventually has turned out successful or not in the New Towns in this book.

Another of our fascinations is with the internationalization of urban planning in this period, in which the colonial powers not automatically were involved such as before the Independence of the new nation states, but a new generation of engineers and planners was shipped and flown in from either the western, the communist or the non-aligned countries. A new generation of internationally working planners came into being.

We started out with a surprised and somewhat indignant feeling when we found in the first phases of the research that in the fifties and sixties there where sometimes farfetched or ambiguous aid programs from western governments, that were always part of intricate networks of cooperating governments and NGO-institutions. It was a way to exert control over developing countries, not with the forceful instruments that an old style empire would use before the second World War, but in the noncommittal style of free democratic republics. But we were even more surprised when studying the present states and challenges of the New Towns. Again, we met with the role of NGO’s, aid organisations, charities and foundations, who provided? assistance as forward posts of one or the other power block. It is precisely the research into the current assignments of the New Towns that shows that the international circus involved in financing, technical assistance and urban design still exists.

Our interests don’t only lie with the historical study of the concepts and the designs for New Towns. It has been developed by the editors to include the present state of the cities, to extend the history into the present. It dives deep into the reciprocities and the erratic developments that have happened after the original designers left and new ones came, the original blueprint was overtaken by a new one or just forgotten, new political regimes came and went while the global relations and balances shifted and changed. All authors have also analysed the path to adulthood and the hick-ups on that path and how the New Towns have grown from concepts into real cities and usually are still in the middle of this.

It is necessary that the legacy of modernist urban planning is being reconsidered, that all these visions on its future are made known and exchangeable, and that the New Towns are being treated as what they are: real cities not be erased, but waiting for a serious design strategy that will add another layer of urban material, and turn them into normal, growing, developing, aging cities.

This book is an initiative by Rotterdam-based collective Crimson Historians and Urbanists who are authors and editors of the book. Next to that, a series of expert architects and architectural historians have authored chapters, such as Ali Saad, Antoni Folkers, Sophie van Ginneken and many more.

The book is being realized with support of Creative Industries Fund, the EFL Fund and the International New Town Institute.

You may refer to this book as:
Crimson Historians and Urbanists (eds.), New Towns on the Cold War Frontier, Rotterdam (forthcoming)