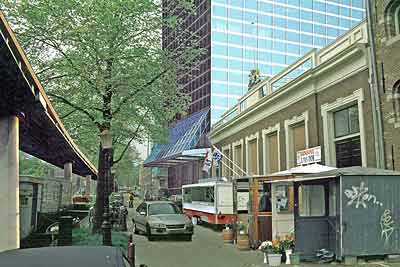 Five Asiatic cities in a row shock us Westerners by the improbable overlappings of programme and form we encounter there. The physical surroundings and the use of these have a hybrid character that to us borders on the impossible: the clean image of smooth skyscrapers contrasts with the unbelievably intensive use of the street, the laissez-faire economy of shopping malls and international companies with the stalls of small family businesses, the chaos you can see with the strict (social) rules you know exist.

This hybrid character presents itself as the confrontation of the global with the local. It is generally assumed that globalization leads to uniformity in culture and economy, but at this moment old and new are still existing alongside each other. It is difficult to imagine that this hybrid moment might well be a permanent quality of Asiatic cities; surely increasing growth and wealth leads to the old condition being shaken off, as articulated in the gentrification and upgrading now happening in Singapore and Hong Kong.
The confrontation with the local is made most clear when large modernizing operations occur, such as road construction and the building of tower blocks and New Towns. Typologies deriving from the Modern Movement in the West (shopping malls, Corbusian towers in green space, gallery-access flats, Archigrammesque city-machines) are taken from their avant-garde background and transformed into totally realistic Asiatic urban models, which differ utterly in their essential use and meaning from the prototypes they derive from. Pressure of land costs, high densities and the time factor have squeezed all theoretical or metaphysical meaning from them. This applies to the Linear City and Putrajaya, to the New Towns of Singapore and Hong Kong, but also to the Haussmannian road widenings in Hanoi, boulevards with no unity in their frontage but boasting individual palaces.
This moment in the development of South-East Asia is memorable in that the global and the local coexist without frustrations in a way that would be regarded as problematic in the West (think of the Bijlmermeer project): a market below a skyscraper, a wedding below a block of flats. Two modes of use, two scales, two cultures, two extremes. What we see here is how the 21st century and the Middle Ages interlock as two parallel universes; we see non-simultaneous phenomena taking place simultaneously. This is a fine thing, in that it enriches city life more than the breaking down, ordering and zoning of use forms that we know in the West.